The Way of St. Francis: A puzzling Assisi reception 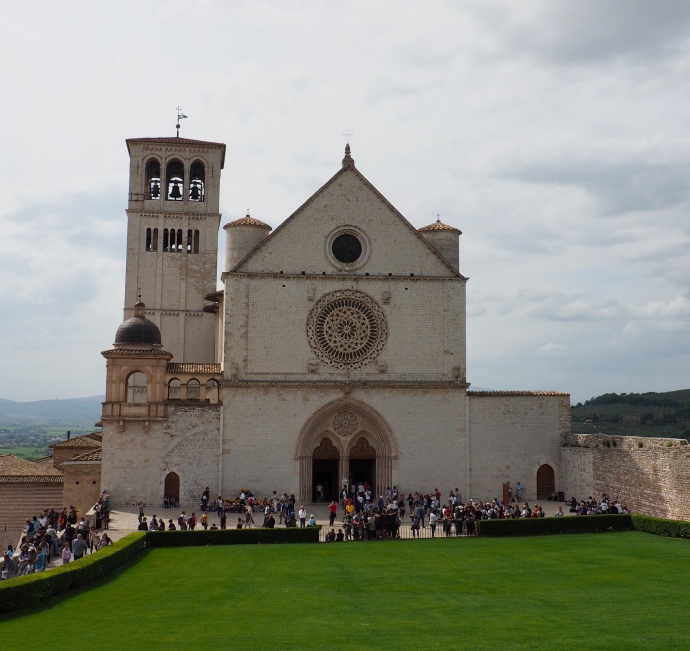 Our arrival at one of the most important religious places in the world did not go as expected. It left us puzzled.

The Basilica of St. Francis stands on the mountaintop in Assisi and sets a high bar for spectacular settings. We had completed the 109-mile pilgrimage from another icon of Catholicism, La Verna.

Now it was time to receive our Testimonium Viae Francisci, an official document honoring our walk on the Way of St. Francis.

“Come in, sit down,” said the brown-robed Franciscan monk, perhaps 25 or so.

A man in his 50s, in civilian dress, sat at a small table across from us in the Pilgrim Office in a building next to the grand Basilica. He was straight-faced, hands folded in front of him.

“Have some water, all you want. Drink, drink,” the monk implored us, pointing to several bottles and glasses on a counter in the tiny room. He burst into laughter. “Have some candy, have some candy,” he said as he waved a bowl in front of us. Laughing harder.

“Thank you, thank you, but we are fine,” we responded, turning our attention to the man at the table.

The older man said a few sentences in Italian and slid two forms across to us with pens. Sue handed him our pilgrim passports, which contained stamps from each of the nine places we had stayed on our journey.

As we filled out the forms, the monk continued to chuckle as his colleague seemed to battle bursting into laughter himself.

When they noticed that we wrote “Roma” for our destination, the monk said, “You will receive your testimonium at the Vatican then.” More laughter.

He saw the disappointment in our eyes.

He reached under the table. Was he going to sprinkle us with holy water? I looked at Sue, who returned my questioning look. I figured it would be rude to refuse.

I wondered what was next. Rather than a splash and solemn prayer, the monk pulled out two small certificates. More laughs from the monk and more Italian directed at us from the older man, still controlling an urge to giggle.

They both looked at us. Hmmm. The papers must be the blessing, I figured. As we got up to leave, we thanked them.

“You know, he speaks English,” the monk said, pointing to the man at the table. He laughed again. The other guy cracked a smile.

I am still puzzled by our visit. No questions about our journey. No “Why did you do the pilgrimage?”

Had we been part of a slapstick comedy routine? It was not what I expected after completing a walk that honors a saint.