Posts Tagged With: Lake of the Woods

Lake of the Woods Rewards

Posted on November 12, 2017 by carryoncouple.com

Our local weather forecast promises a wet week ahead so we took advantage of the sunshine today, grabbed our friends Lan and Jeff and headed for the hills.

Lake of the Woods, about 30 miles east of Ashland, Oregon, is one of our favorite day trips. As we walked along the water’s edge, we were rewarded when swirling clouds revealed a view of the 9,495 foot peak of Mount McLoughlin looming over the Lake.

During warm summer months the waters of Lake of the Woods are alive with boaters, kayakers and children splashing along the shore. Winter months offer a cold and quiet beauty…and (Friday -Sunday) Lake of the Woods Pizzeria, a cozy spot to enjoy the view, an afternoon bite to eat and visit with good friends.

How we found Lost Creek Bridge

Posted on November 27, 2016 by carryoncouple.com

The Marina Grill at Lake of the Woods is open on weekends during winter.

Our Thanksgiving weekend was drawing to a close, but we had time for one more outing before my dad and brother made the long drive home to Southern California.

Because the predicted rain had not yet arrived, Reg and I suggested a drive into the mountains to grab a bite to eat at one of our favorite spots – Lake of the Woods.

Once refueled, we continued onward, choosing not to backtrack, but to continue forward, returning home along a different route.

It was a small sign along the highway that caught Reg's attention. “Historical Bridge next left” it said and before we knew it we were bouncing along a narrow country road in search of a piece of Oregon history.

The official construction date of the Lost Creek Bridge is listed as 1919, although many locals claim the bridge was built as early as 1879 – 1881, which would make it the oldest standing covered bridge in Oregon. It was added to the National Register of Historical Places in 1979.

If you want to document your visit, there is a registry to sign on the bridge…but be sure to bring along a pen. If one was ever provided, it is long gone. You will also find a picturesque little park adjacent to the bridge which is just perfect for a picnic lunch. 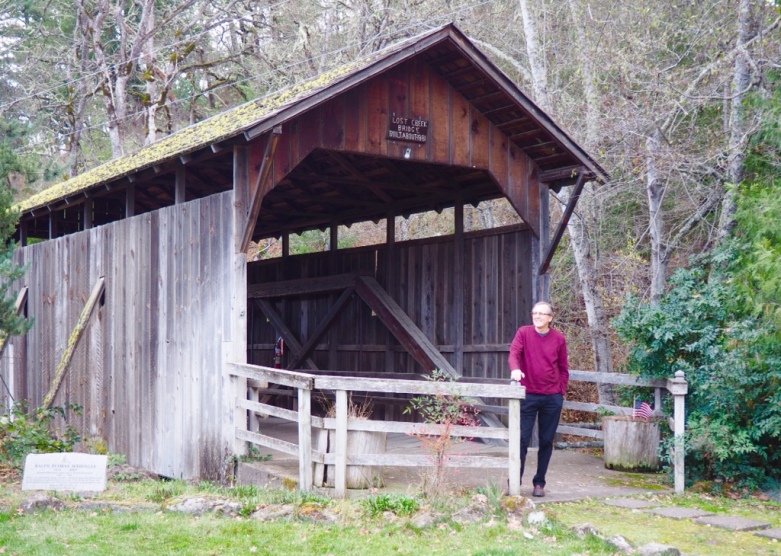 At just 39 feet long, Lost Creek Bridge has the distinction of being the shortest of all Oregon covered bridges. 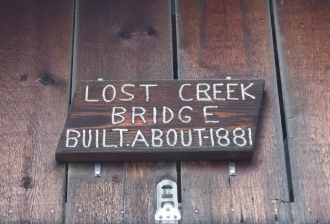 Facts about the construction date of the bridge are a little fuzzy.

Lost Creek Bridge has been closed to traffic since 1979.

Just across the road a herd of curious cattle keep an eye on us.

Lake of the Woods: Relaxation in the Cascades

Posted on September 8, 2016 by carryoncouple.com

All is quiet the day after Labor Day at a Lake of the Woods beach.

Mount McLoughlin dominates the Cascade Range during our kayak cruise. A bald eagle watched us at one end of the lake.

Lake of the Woods is the crown jewel of lakes in the southern Cascade Mountain Range within an hour or so drive of Ashland, Oregon.

At 4,949 feet elevation, the natural lake offers relief from summer heat with swimming, boating, fishing and other fun managed by the Lake of the Woods Resort.

We hitched up the trailer on Labor Day and headed for Aspen camp, one of two National Forest Campgrounds on the lake.

The resort was a short walk away from our quiet, deserted campground. We resisted the restaurant but found firewood at the camp store.

The lake's level fluctuates just two feet during a normal year and water temperatures warm to the 70s at the surface. Brook and rainbow trout as well as Kokanee salmon swim in its waters.

Fish Lake was our destination on a nearly seven-mile stroll from North Fork Campground, just a short drive away. We found a greasy spoon cafe that fit the bill perfectly.

Brown Mountain is a backdrop for Reg's stroll. 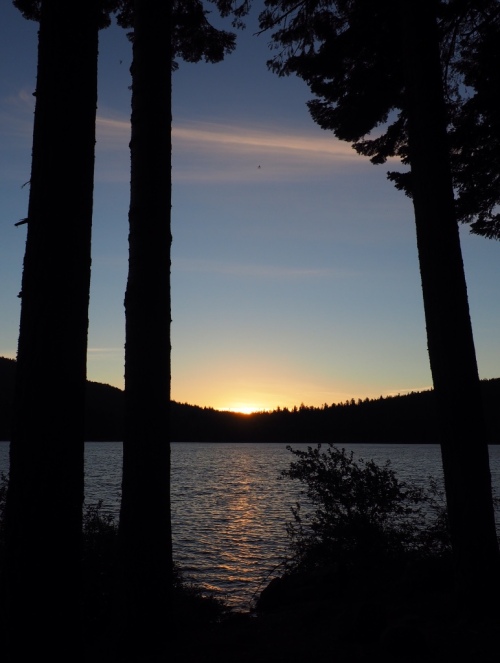 Fall was in the air as nighttime temperatures dropped into the 30s.

A boardwalk keeps Trekkers dry during the wet spring months.