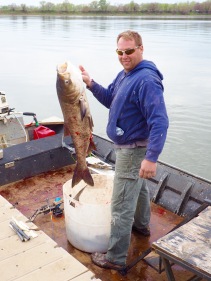 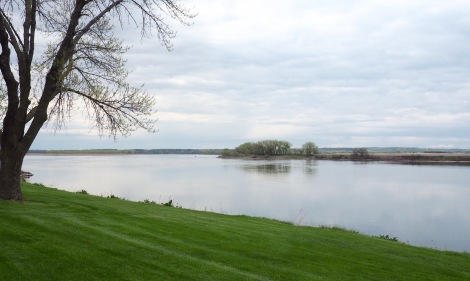 To be honest, Tuesday’s drive, 320 miles across the fairly flat farmlands of northern Iowa, was uneventful. We were not tempted to pull off and explore. The two Misses rivers on either side of Iowa were beautiful, though.

As we left North Sioux City in southeastern South Dakota this morning, the landscape quickly became more engaging. A walk along the Missouri River led to a meeting with a fisherman who had bagged a 29-pound big head carp, aka Asian carp.

Then we saw a bridge across the river. It led to Nebraska. So we drove across and found the Gavins Point Dam (above) built by the Army Corps of Engineers. We drove across the dam, back to South Dakota, to explore more backroads leading to our campground in Kennebec.

The rolling hills of southeastern South Dakota (top photo) are cattle country. We passed many trucks with cattle carriers heading for market. Lots of livestock, many with calves, roamed the rolling hills.

As Sue prepares our pasta and salad dinner, the skies are turning mostly blue, just in time for our visit to the Badlands and Black Hills.

After nearly two weeks of cool, wet weather, warm and dry have returned!