The Way of St. Francis: The trail is closed 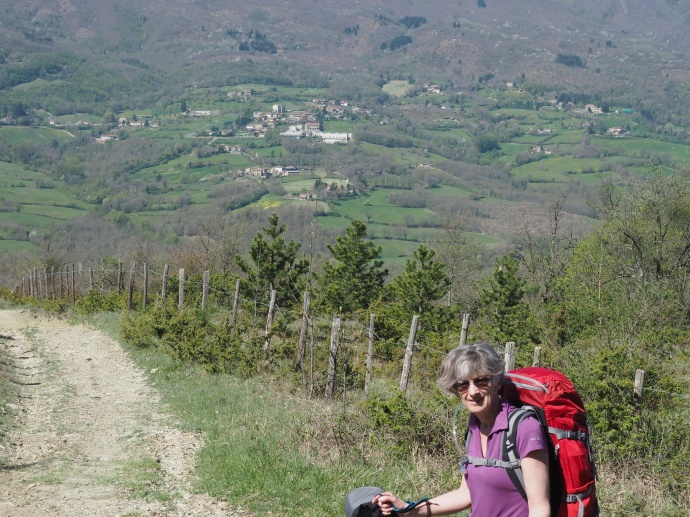 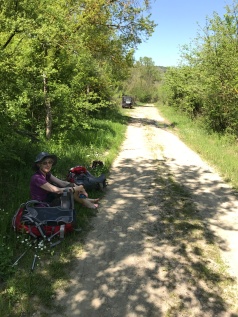 Today we faced a new trekking challenge: a closed trail. Still many miles from our destination, we stood before a sign threatening penalties (arrest?) if we crossed the tape strung across the Way of St. Francis. What should we do? Turn around and go back?

A 15-mile day loomed, so we had set out from Pieve Santo Stefano before 8 this Sunday morning. Today’s trek began with a hill that was only a few hundred feet in elevation, but it was a tough beginning nonetheless. But it was nothing compared to the steep descent over loose rock that was like walking down a rockslide. They call this a trail? My knees were still wobbly when we soon climbed another 800 feet. We found a place to rest our feet and I promptly took a power nap that Sue photographed for the record.

Stunning views of the Tuscan countryside made it all worthwhile. Then we crossed a bridge over a reservoir finger and the Way of St. Francis became a windy country road complete with hot pavement. We found a sliver of shade for a picnic lunch, then continued along the road another couple of miles. Motorcycles, bicycles and cars sped by us. The guidebook and our GPS map told us to take a sharp left onto a gravel trail (no more pavement!). Then we saw it. The closed iron gate across the path, the tape strung next to it, the warning not to pass, the decision.

I looked at our map on Galileo Pro. If we continued on the road, it would take us many miles out of our way. Turning around was not an option, so we lifted the tape after deciding to take a chance. After less than 100 yards, we stopped as we approached a farmhouse. Did we really want to risk a night in jail?

Back on the legal side of the tape, we enlarged the map on my phone and saw a thin white line a half mile down the road that connected to the trail. Was the line a path? Would the trail section it led to be open? We decided to take a chance on the digital map and the white line turned out to be a farm road that led us back to the Way of St. Francis. As luck would have it, we were just past the closed section.

So, relief was the word of this day. We walked atop a levee for several hours, past large  farms. Tractors plowed (even on a Sunday) and the temperature climbed. A short detour allowed us to rest in some shade.

When we finally arrived in the bustling city of Sansepolcro, we found the narrow way where our hotel was supposed to be. Before frustration set in, a tall, thin young man, figuring these two wandering souls wearing backpacks must be the Americans who reserved a room at his hotel, greeted us. He pointed to the hotel sign in the wall. How could we have missed it? It was about two-by-three inches and perfectly readable if you stood less than a foot away.

Our day ended at a wonderful restaurant after a couple of strong beers at a plaza bar.

13 thoughts on “The Way of St. Francis: The trail is closed”