Lots of excitement on the road Friday. Reg did a great job of remaining calm and confident as he towed us 280 miles in and out of mild snow flurries. Arriving at our campsite, we quickly set up, climbed inside and blasted the heater as we watched the snowfall kick it up a notch. The sun returned at daybreak, highlighting the beautiful backdrop we’ll enjoy the the next few days.

Today’s outing found us climbing up one of the more popular trails Capitol Reef National Park offers. It was Saturday (which we’d forgotten) and a free entry day (which we didn’t know about). We’ve been a little spoiled when it comes to share the trail with so many other folks, but the clumps of walkers eventually spread out and once we reached the top we realized it was all worth it.

We watched the group to the left of the arch practice their rappelling skills as, one by one, they dropped out of sight. A guide explained there was a series of smaller arches they would rappel down before hiking out from below. Keeping both feet on the ground, we reversed our steps back to the trailhead. 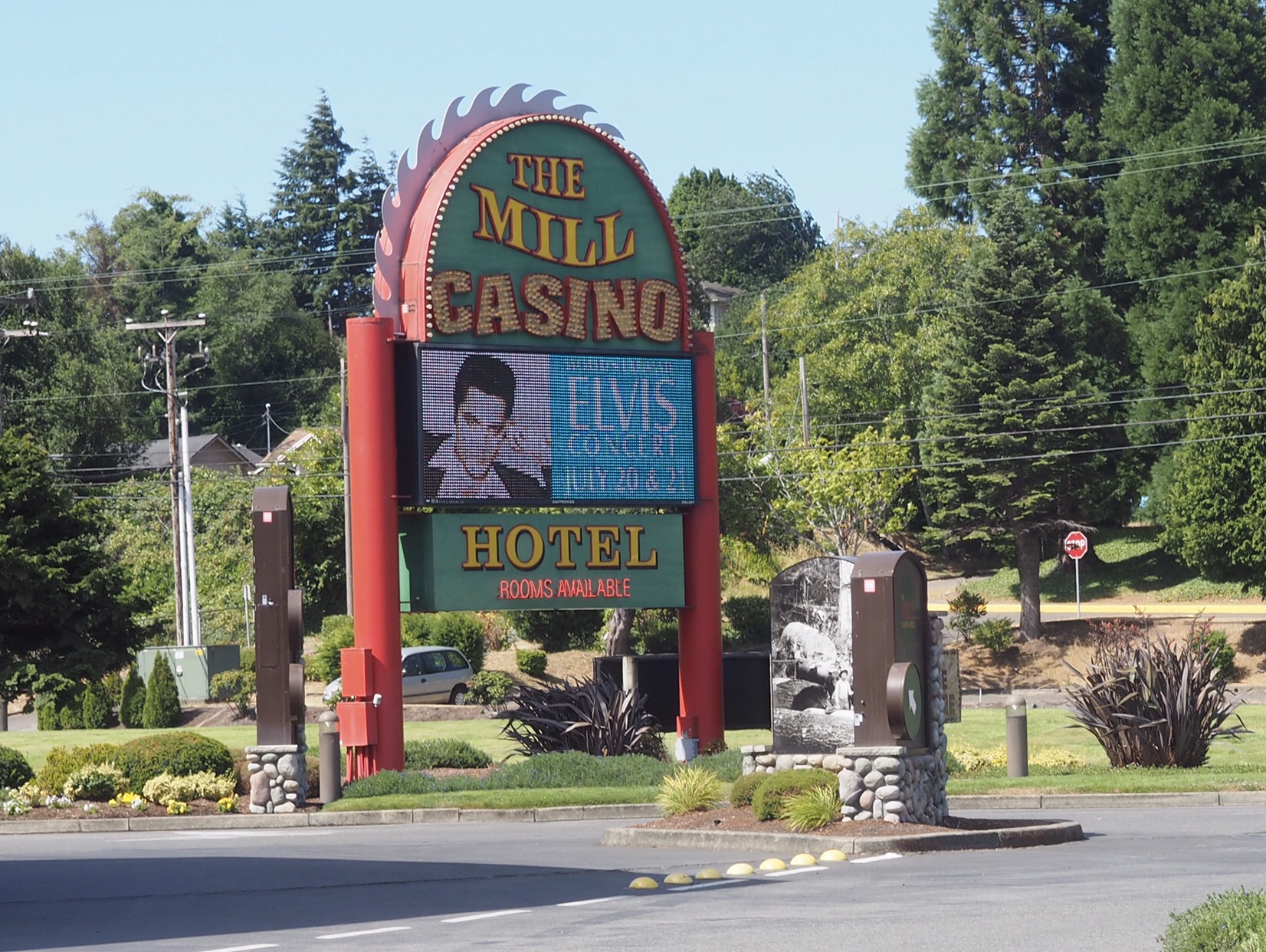 Reg pulled in to check out the The Mill Casino RV Park in Coos Bay, and since we were there, I couldn’t resist trying my luck. I waved goodbye to my five dollar bill as I fed it into a giant slot machine…then pushed the button. Much to my surprise, I walked away with a $20.00 profit. I was thrilled! Maybe we’ll go back and see Elvis this weekend!

A Whale of a Good Time at Yaquina Head

Posted on September 12, 2017 by carryoncouple.com 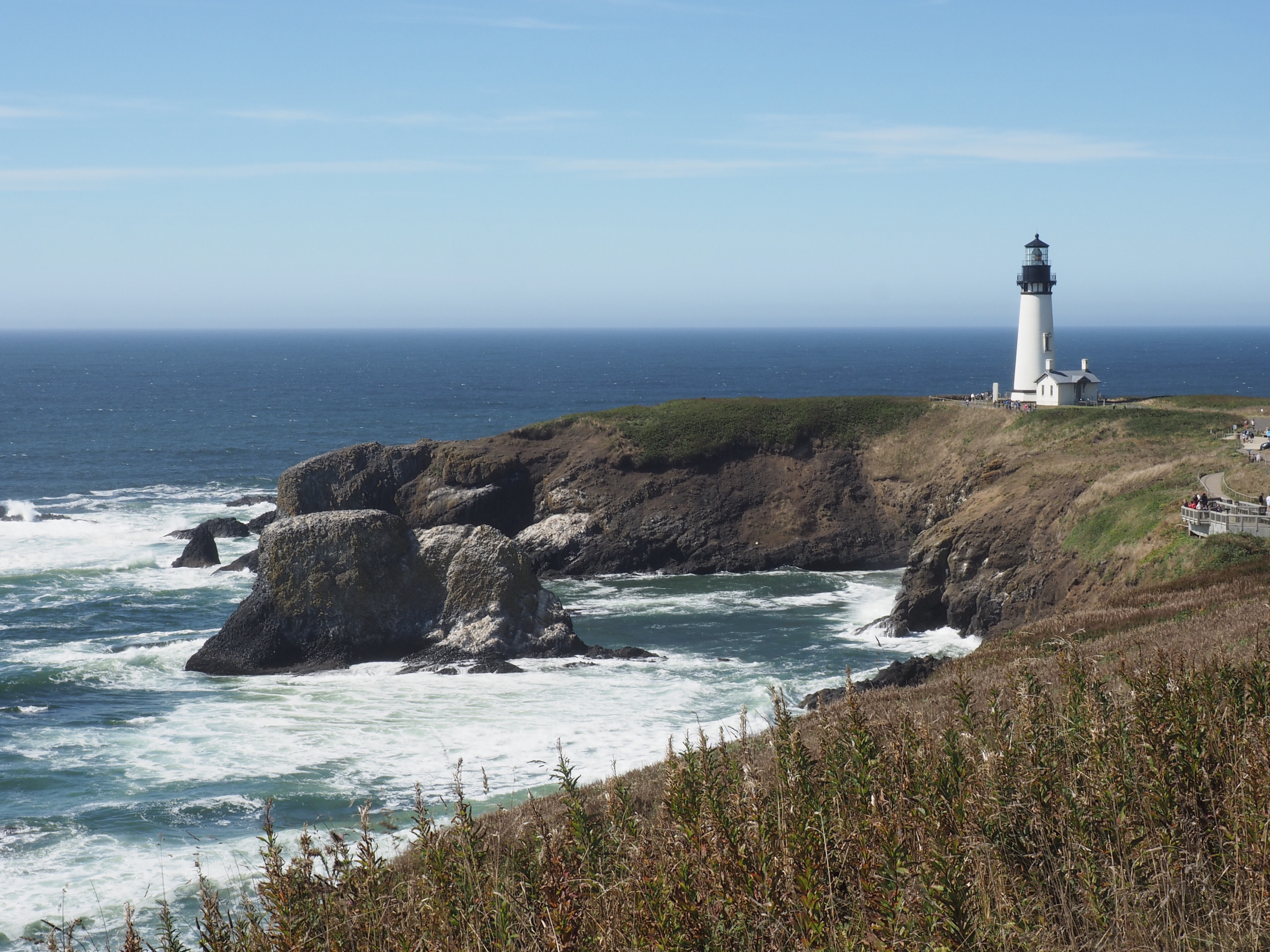 When smoke continued to choke the Rogue Valley last week, we decided it was time to live dangerously. We hitched up our trailer and headed to the Oregon Coast…without reservations! Spontaneous and risky! And successful. Arriving early on the last day of a three-day holiday weekend allowed us to easily find a full hookup spot at a first come – first served campground.

Our favorite outing of the week was a trip to the Yaquina Head Lighthouse with friends and fellow campers, Lan and Jeff. Managed by the Bureau of Land Management, the lighthouse has the distinction of being the tallest (at 93 feet) on the Oregon Coast. Free tours of the lighthouse are available most days. Space is limited, so check in at the Interpretive Center to get your tickets.

As great as the lighthouse tour was, the stars of the day were the resident gray whales that linger off the coast near Newport from May through October or November. They swim surprisingly close to shore and put on quite a show for us throughout the afternoon.

Scanning the water, we were continually rewarded with a glimpses of a water spouts, followed by gracefully arched backs of the diving whales. The sight of a fluke (when the tail sticks straight up) never failed to raise a cheer from spectators.

Although the whales were swimming just beyond the rocks, capturing them with my camera lens was impossible…so, while we have no photos, we do have many memories of a beautiful afternoon spent at the Yaquina Head Lighthouse and surrounding Natural Area. 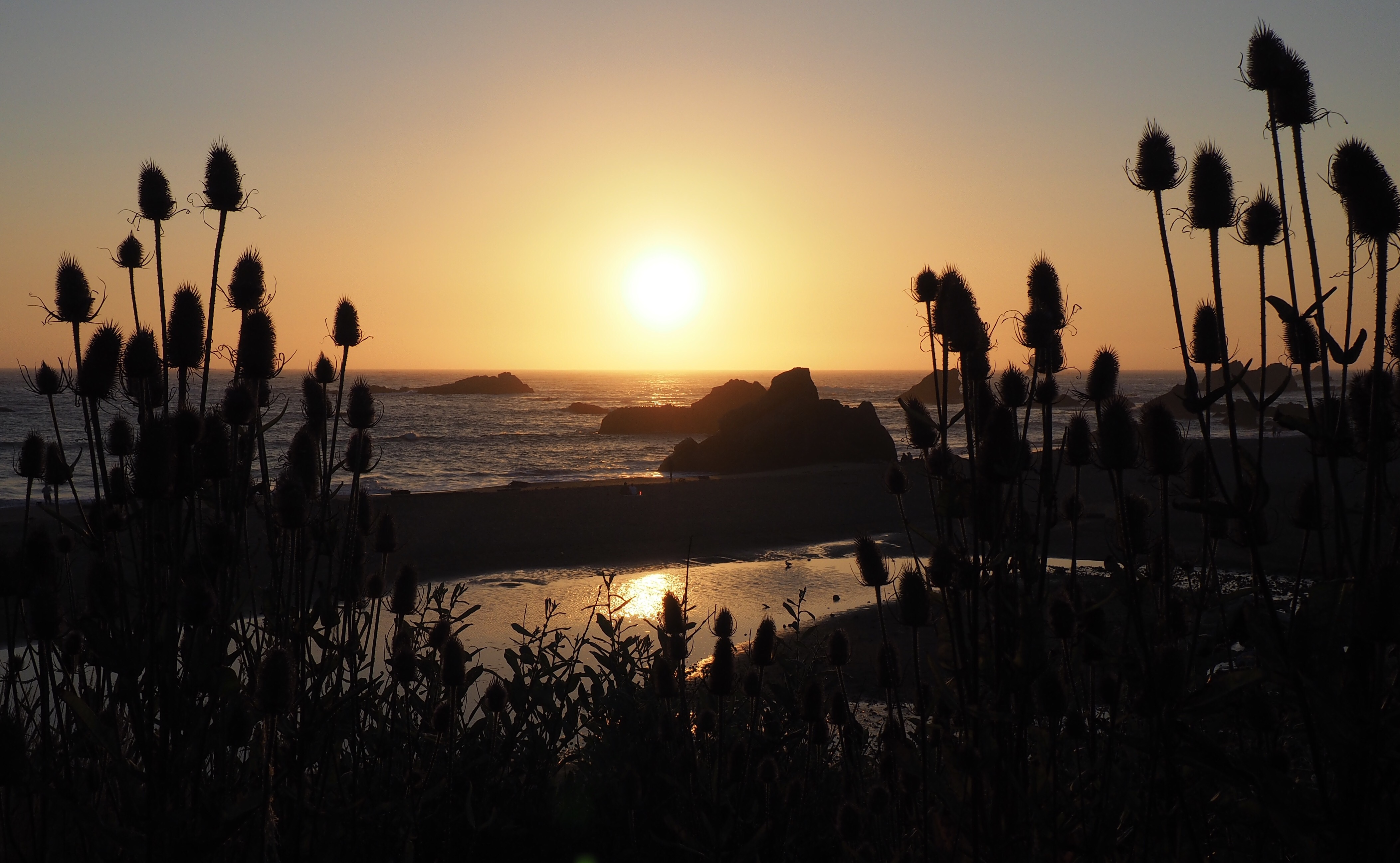 We are enjoying a four-day escape from home where work has begun on a new roof for our town home. Longtime friends, Kathy and Doug, drove their trailer up from California, joining us to camp and explore Oregon's beautiful Coast. We finished dinner just in time to rush down to the beach and catch the setting sun. 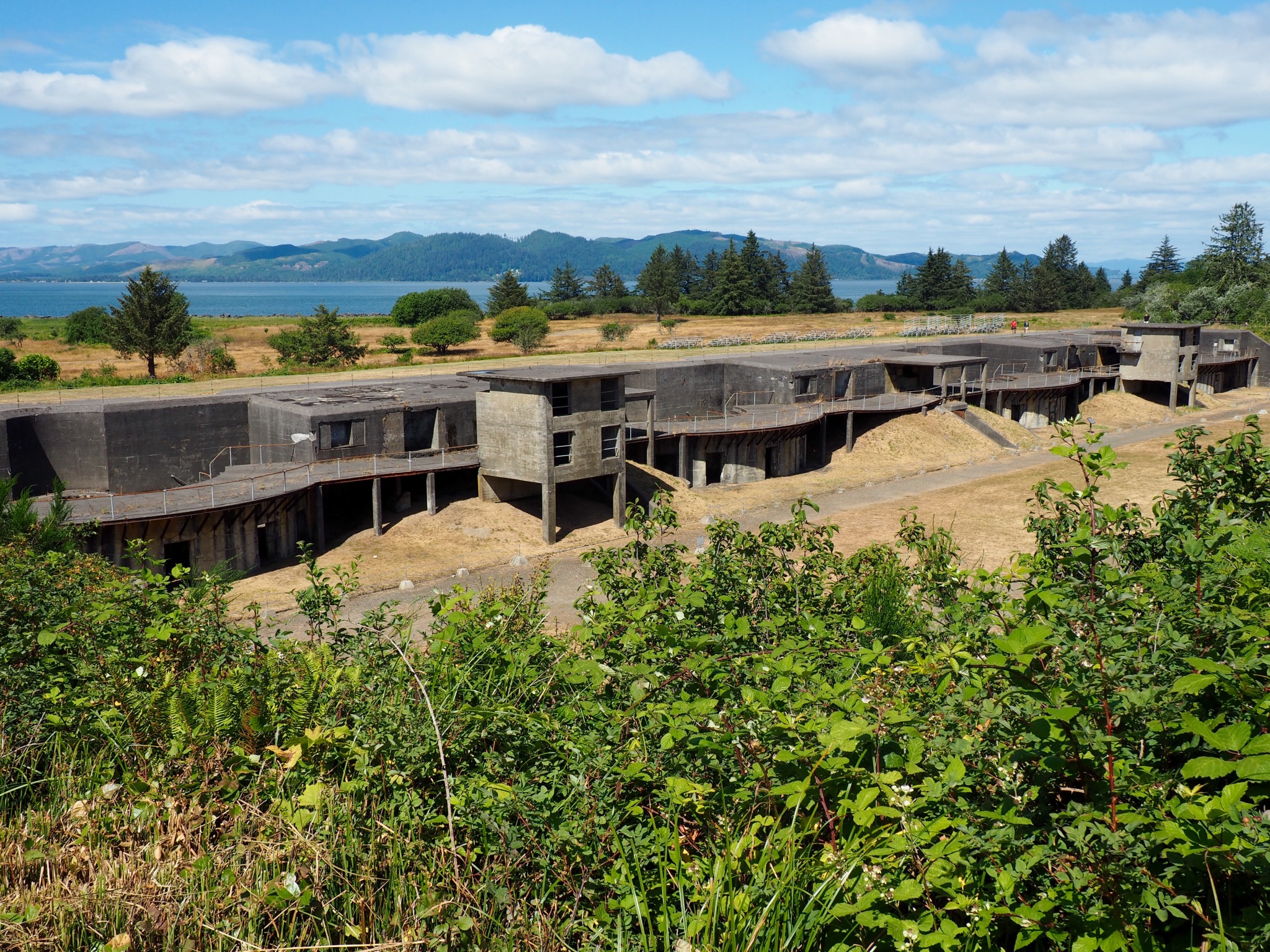 We are camped at Fort Stevens State Park and have enjoyed exploring an area known for being at the mouth of the Columbia River and the turnaround point for the Lewis and Clark Expedition.

The campground is the largest Oregon state park with more than 500 campsites. Before you wince at that number, we must tell you that the loops are arranged such that we felt like we were in quiet, small campground most of the time. We were joined by many resident mosquitoes, however, who enjoyed the swampy surroundings and lush vegetation. A dense, tall forest keeps it comfortable for them. Our campfire and a ring of defense chemicals (including Bounce sheets) kept them at bay.)

Speaking of defense, Fort Stevens was a military installation from the Civil War through World War II, with many batteries, such as the one pictured, standing by to protect the Columbia entrance. 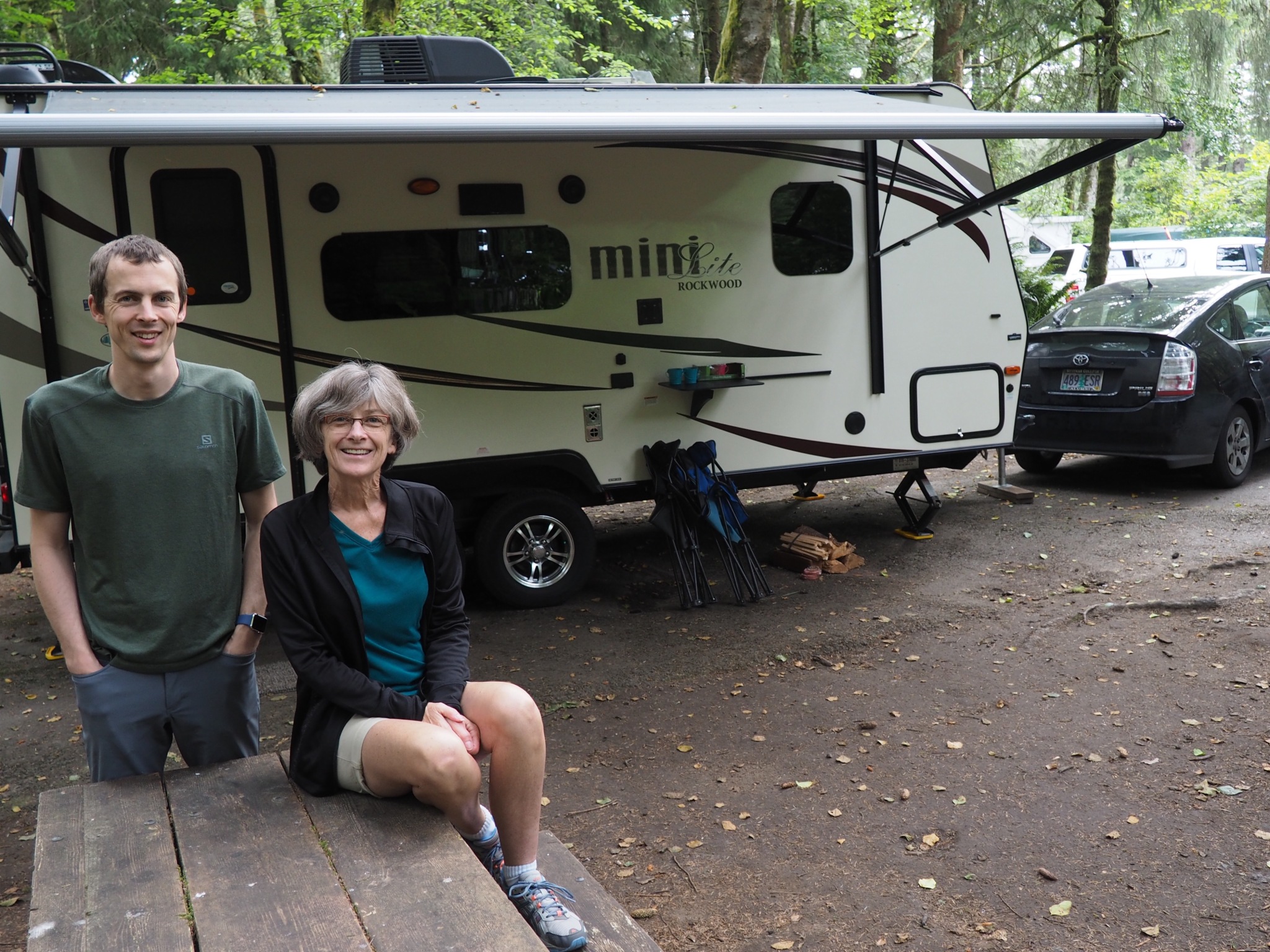 Our son Andrew drove from his Portland home to join our expedition that included a walk to the ocean to see the 1906 wreck of the Peter Iredale, which ran aground while looking for the Columbia River mouth. 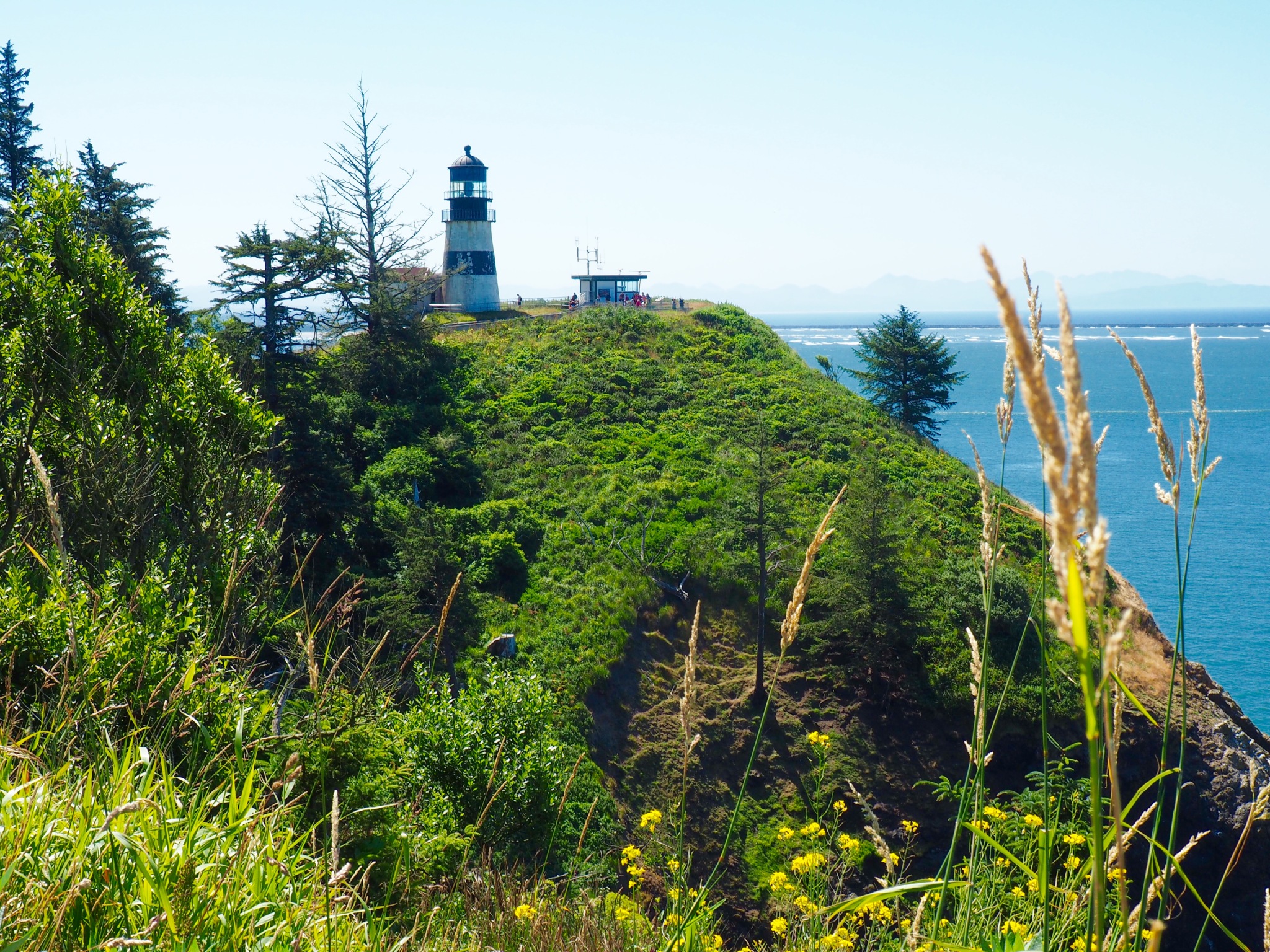 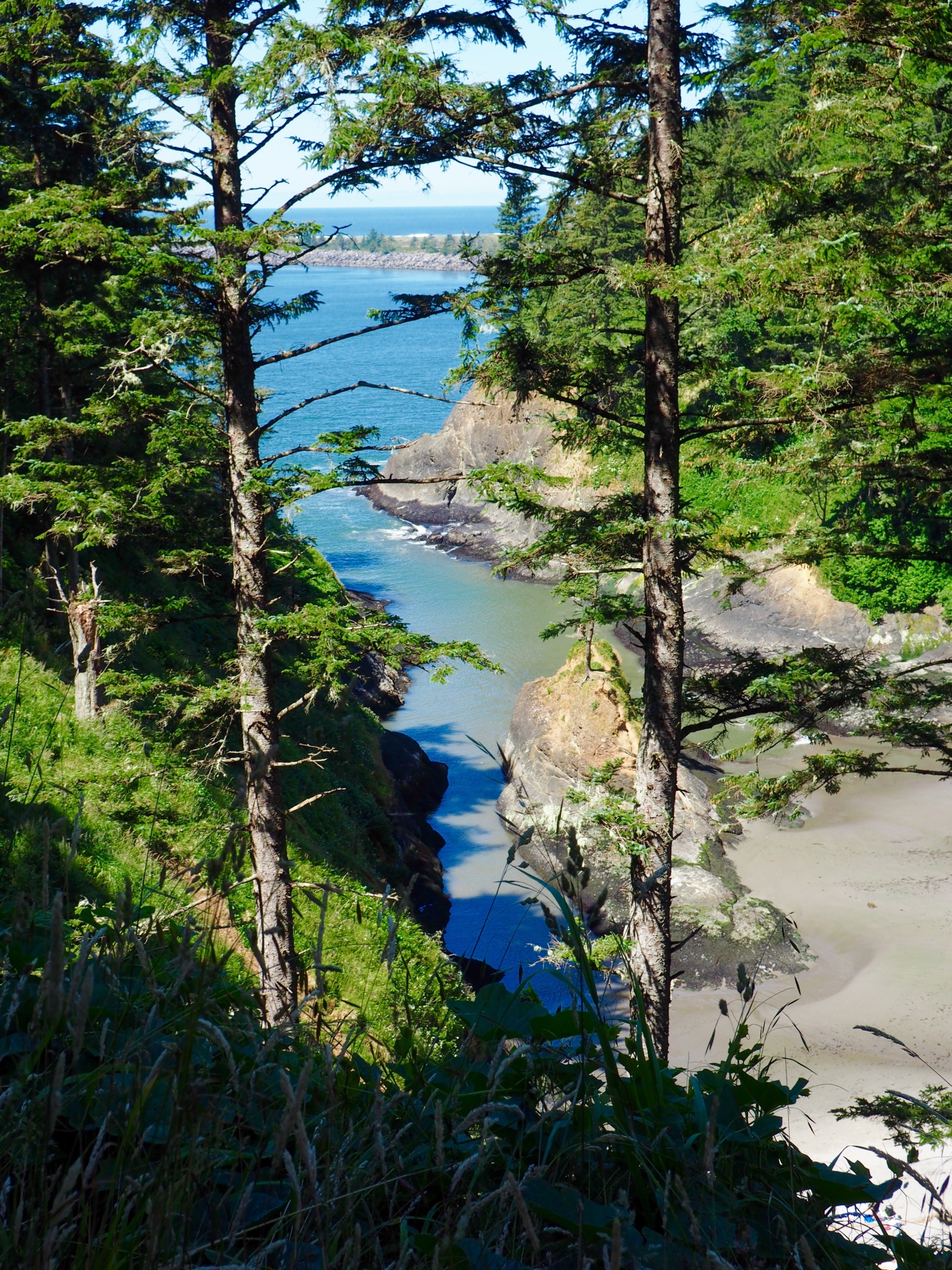 To find where Lewis and Clark first saw the Pacific in 1805, we crossed the Columbia River on a three-mile bridge from Astoria and found the Cape Disappointment Lighthouse in Washington. Our 11-mile roundtrip trek from Cape Disappointment took us through forest where William Clark and his men camped.

The cape got its name in 1788 from an English captain who could not find the Columbia River mouth. Disappointing. I’ll say!

Some nice ocean views and Waikiki Beach (east!) marked our walk. Our destination was the North Head Lighthouse, which was shrouded with scaffolding while undergoing restoration.

While looking for a place to spend the winter, Lewis and Clark canoed across the river to what is now Oregon and quickly built Fort Clatsop, part of Lewis and Clark National Park. We decided to go back by car.

We found that the Park Service had rebuilt the fort and we covered our ears while  a ranger demonstrated an early 19th-century rifle firing. During her talk, she told us that a misfire was called a “flash in the pan” and the gun’s parts gave us the expression, “lock, stock, and barrel.”

The fort is also the site of some family history. We brought Andrew here when he was one year old. Actually, younger sons Brad and Chris were here too, in a much more confined state. 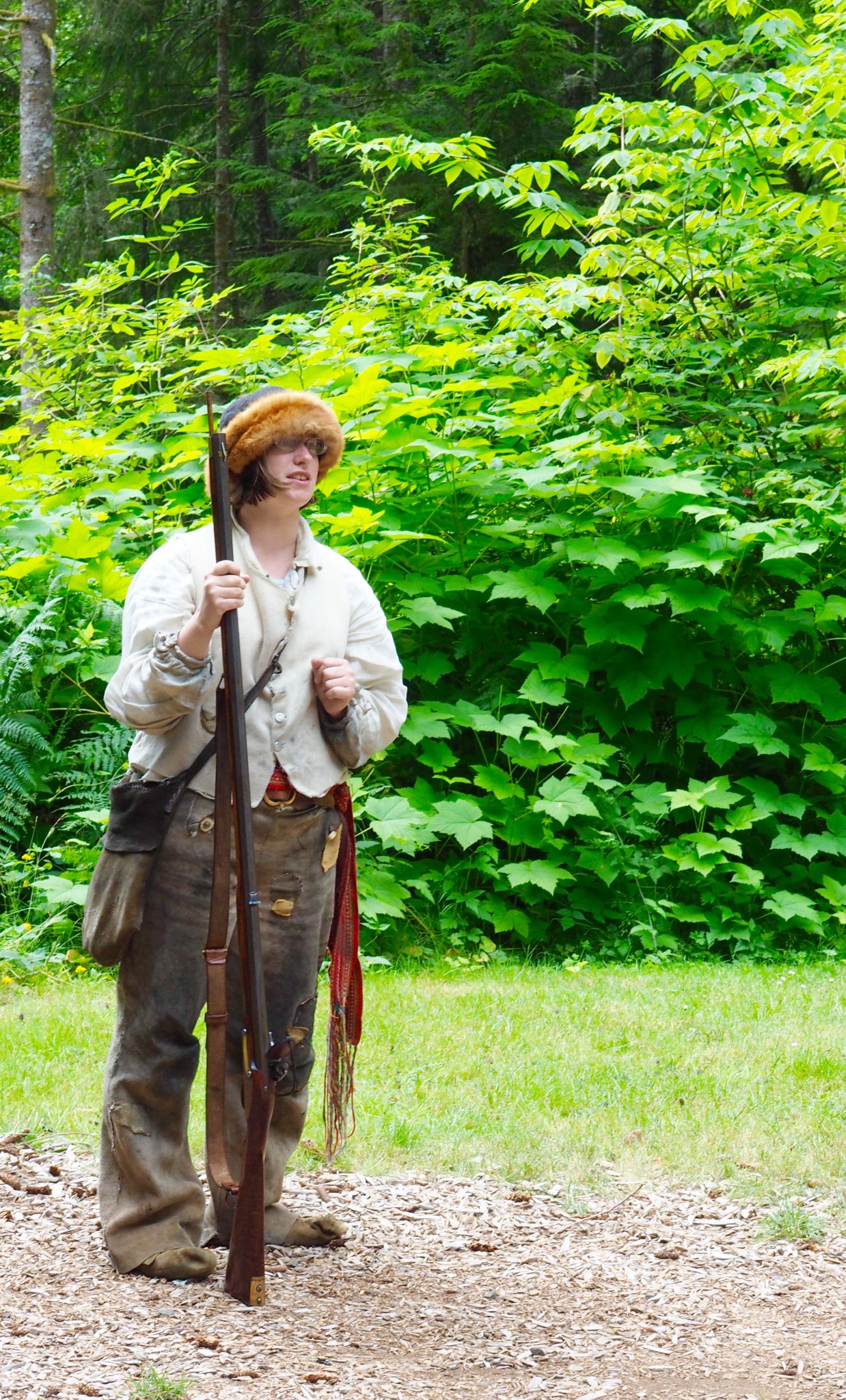 …or have we?  When Reg reserved our “one night stand” at Umpqua Lighthouse State Park on the coast of Oregon, we both had a pretty clear memory of our prior visit and a mental picture of where we’d be staying as we headed up the Oregon Coast.

When Reg pulled into the campground I commented that it was much more forested than I remembered.  Without another thought we checked in, quickly set up camp and headed out to explore the ‘hood. 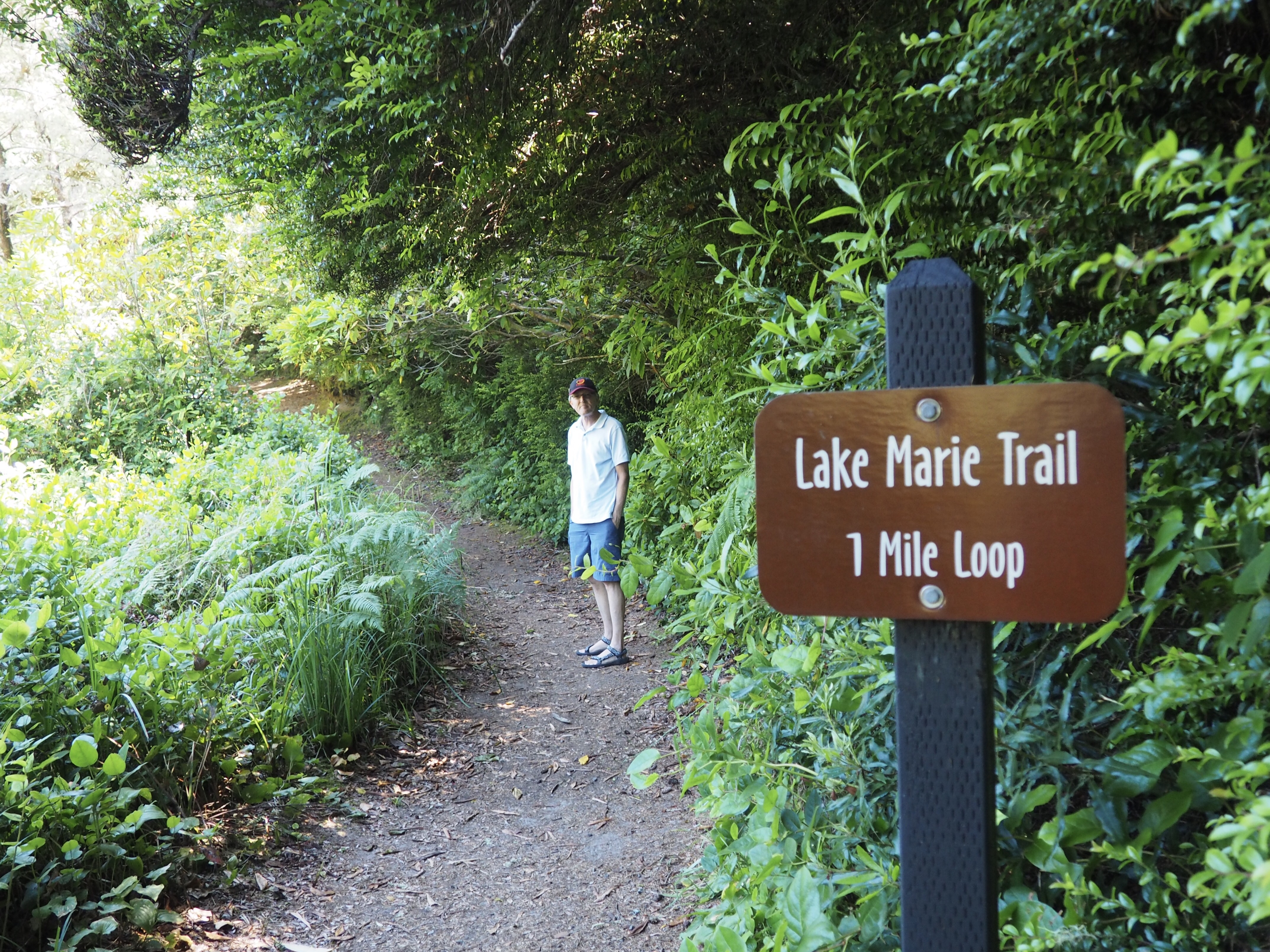 Following a one mile trail that looped around Lake Marie, Reg marveled at our surprise discovery.  “I never would have guessed this lake was here,” he said as we watched children splashing in the swimming area.

When the camp host told us the Lighthouse was just a short quarter mile walk from our campground, we began to have reservations about our reservation!  Perhaps we were not where we thought we were…

Slightly disoriented, we arrived at the Lighthouse and realized why everything felt so unfamiliar.  As it turns out, we’ve never been to Umpqua Lighthouse State Park before…until today that is!  A chat with a crusty old sea captain type who was selling admissions to the Lighthouse Museum cleared up our confusion, reassuring us that we weren’t completely losing our minds.  It seems our memories (and where we thought we had a reservation) are from (we think) Heceta Head Lighthouse, just north of here…where there is no lake and the campsites are not quite so forested!

On our way to the Boy Scout Tree in California’s Jedediah Smith State Park today, our camera found several other old, tall living things along the trail, including a former Scout! 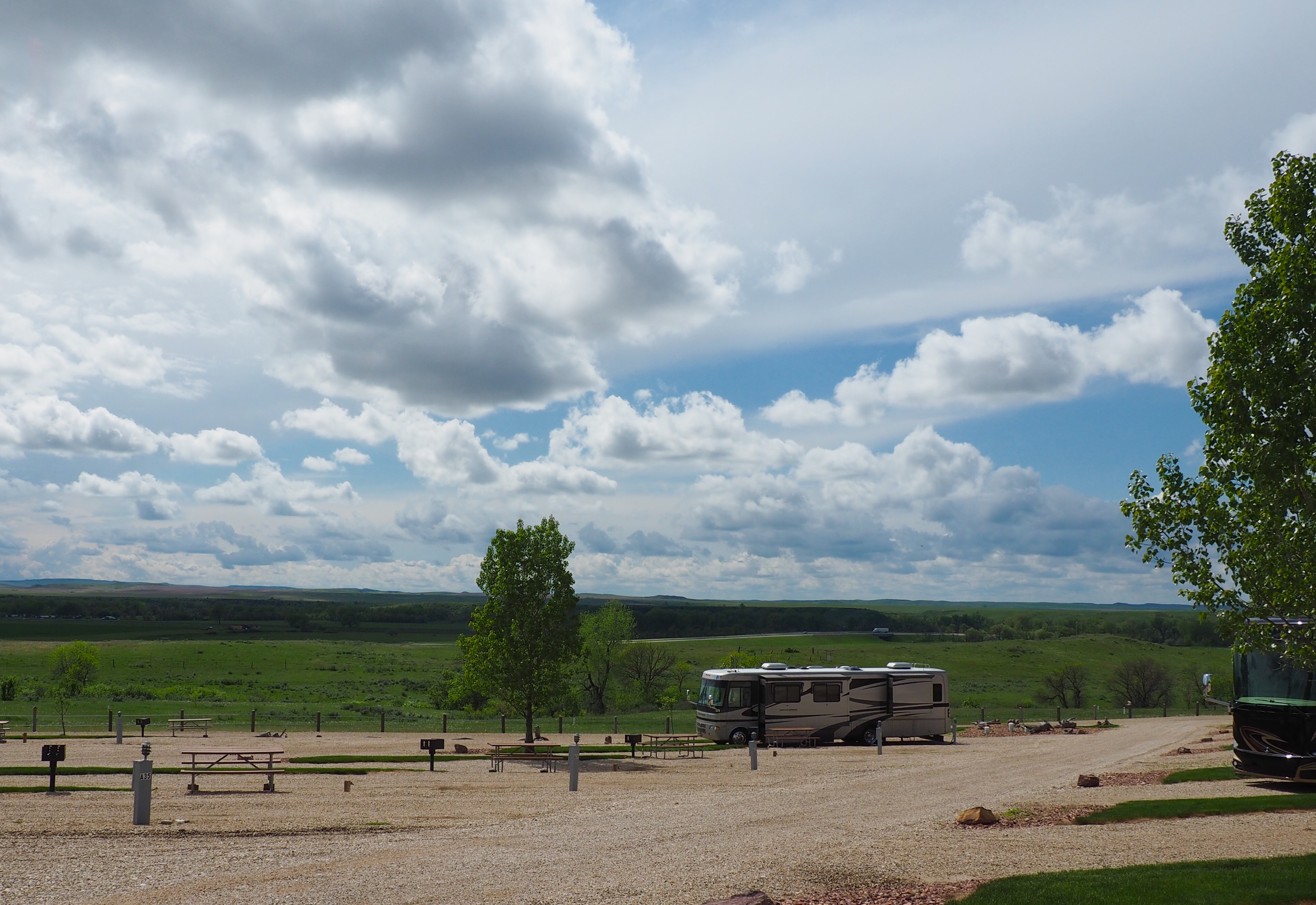 Today we wound our way out of the Black Hills of South Dakota, snuck through a corner of Wyoming and arrived in Montana – Big Sky Country.  The gently rolling hills of Montana’s eastern plains seem to stretch on forever…and so does the sky above them.

It seems like spring has been late arriving in the northern part on the United States.  Although landscapes have been green and lush, trees have continually been bare of leaves. That just made it all the more exciting to stumble upon these wildflowers blooming on the hillside behind our campground.

Montana is a new state for both of us, and we are eager to discover what adventures lie beneath this “Big Sky.”  Plenty of time for that tomorrow!

Backroads Across America: Black Hills Give It Up

The drive to Mount Rushmore National Memorial gives visitors several frames for one of the world’s most spectacular engineering achievements. When you steer along Iron Mountain Road, go counterclockwise if you want the four presidents in your windshield.

A quick detour: Can you name the four presidents? (Answer below)

The 17-mile road was designed to connect three one-lane tunnels blasted in the rock. It features 314 curves, 14 switchbacks and three pigtails.

Sculptor Gutzon Borglum’s presidents measure 250 feet across and each head is 60 feet tall. Why were these four chosen? George Washington, for leading the struggle for independence. Thomas Jefferson, the idea of government by the people. Abraham Lincoln, ideas on equality and the permanent union of the states. Theodore Roosevelt, the emerging role of the U.S. in world affairs.

On our way to see the four stone heads, we explored the 71,000-acre Custer State Park. This place alone would be worth a visit to South Dakota’s Black Hills. We walked around Legion Lake, one of several lakes in the park, then picnicked next to a creek.

We began our day by hiking to Cathedral Spires, one of the park’s many treks that vary in length and degree of difficulty. They share a location as beautiful as any we have seen on our journey, which is nearing 8,000 miles. 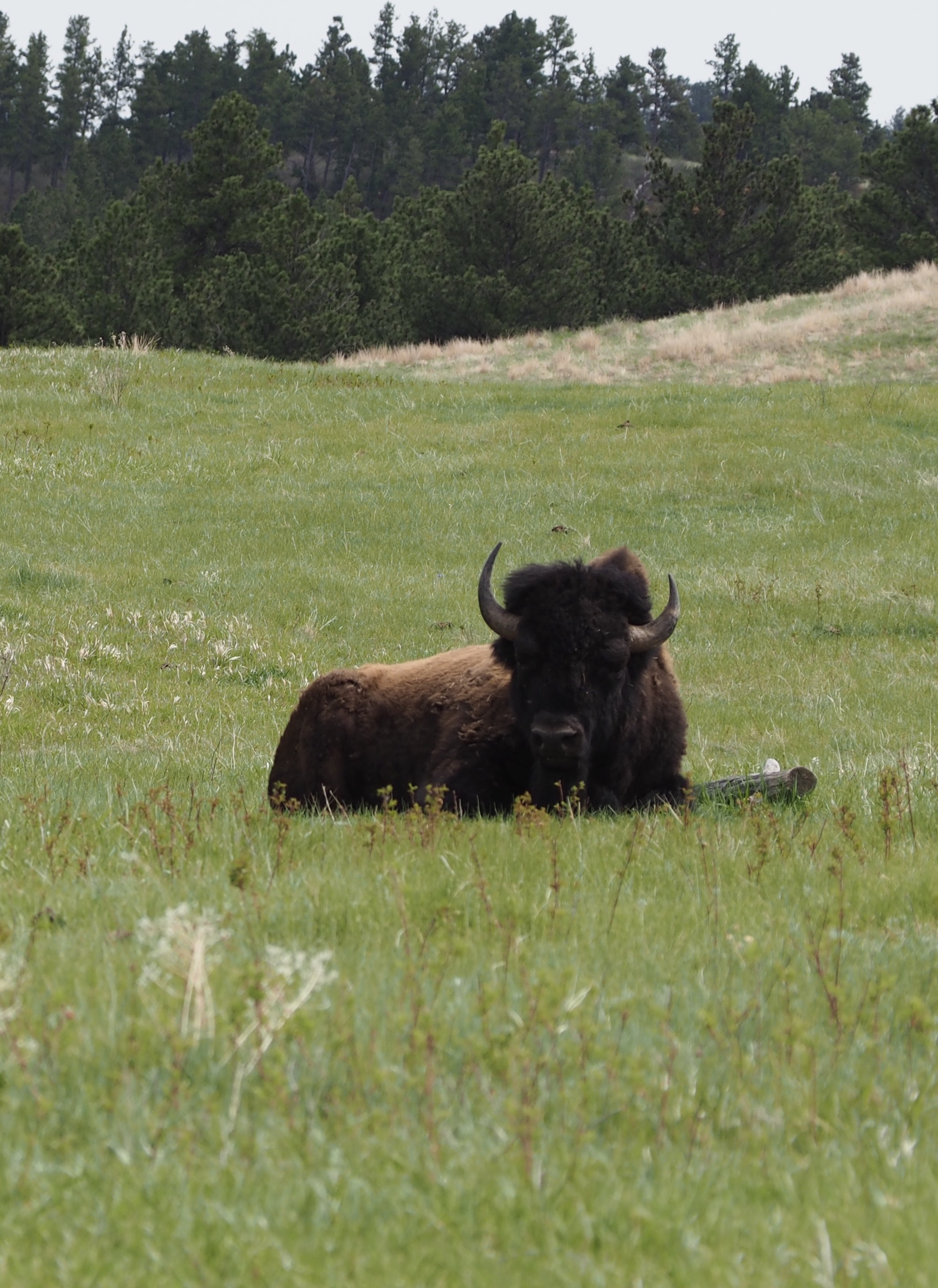 Custer State Park in South Dakota is home to a herd of approximately 1,300 buffalo. These magnificent animals can be seen roaming freely throughout the grasslands.  The best way to view them is from the safety of your vehicle while driving the 18 mile Wildlife Loop Road…which is what we did today.

Park grasslands can only support about 1,450 buffalo, so the herd is carefully managed. Every fall the annual Buffalo Roundup takes place, allowing the park to brand and vaccinate the calves, inventory the grasslands and to determine how many buffalo will be sold at auction.  The event is open to the public, and this year the roundup is scheduled for September 29…so you still have time to make your plans! 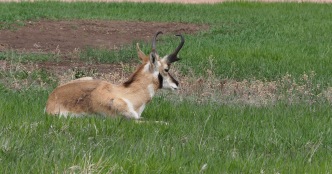 We saw a few other critters out today.  A pronghorn was oblivious to my photo attempt. A herd of wild burros begged snacks from a fellow motorist and we waited as wranglers led trail horses across the road to fresh grass.  All in all, I’d say we had a successful hunt!