With just three days to cover 2,200 miles, we had our work cut out for us. I know your asking yourself, “What in the world were they thinking?” Well, truth is, we probably didn't have our thinking caps on when we cooked up this adventure, but it sounded good at the time…and as it turned out, we did have a pretty good time!
Reg and I crawled out of bed in the wee small hours of the morning with plans to drive straight down Inerstate 5 – as far south as we could. Our destination: Austin, Texas…a state neither Reg nor I had ever been to. Our goal: To deliver our Subaru to our son Brad who was visiting a friend in Austin. Ultimately, the car will find a new home in West Virginia with our son Chris and his girlfriend, Gail. Brad is on his way there as I write this.

Another early morning on day two as we left Blythe and California behind. No time for sightseeing, so I snapped this shot of the Arizona desert as we sped along the interstate. 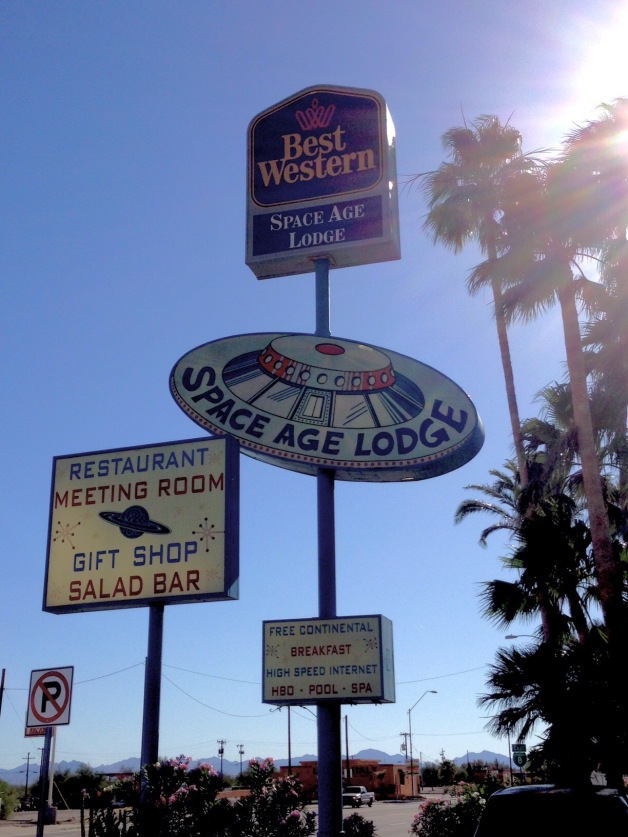 Another window shot as we speed past mile after mile of the iconic Saguaro Cactus that cover southern Arizona.

Day two draws to an end and we seek lodging in Van Horn, Texas. A wide spot in the road you might think, and you'd be right. But this little town has a claim to fame and it's not just the Friday night Karaoke.

Chuy's, we learned, is home to The John Madden Haul of Fame, where there is an abundance of memorabilia on display. It is well documented that former NFL player and television commentator John Madden doesn't like to fly, and during his TV career he preferred to travel in his private coach, watching football games along the way. In 1987, reception was not great while traveling by coach along this stretch of Interstate 8, so Madden had his driver pull over at Chuy's Restaurant, where he sent his assistant in to search for a clear picture. The rest, as they say, is history. Madden was able to watch the game while enjoying Chuy's delicious Mexican cuisine, a combination that proved so successful that he returned year after year.

We said good bye to Van Horn, Texas well before daybreak and were rewarded with a beautiful sunrise as we drove east.

We reached Austin right on schedule, a little road-weary but eager to see downtown.

Here's Brad getting ready to devour The Notorius Pig, a macaroni and cheese covered hot dog offered at Franks Restaurant in Downtown Austin.

4 thoughts on “Three days to Texas”